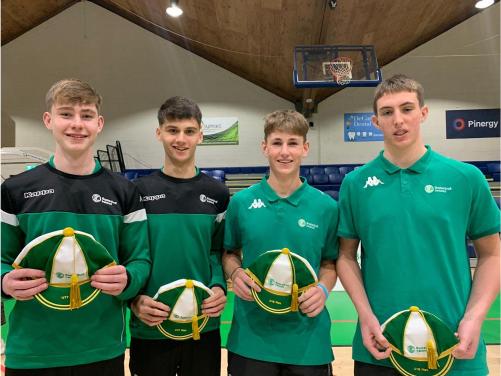 Four more Limerick Lions lads received their Irish caps on Saturday 24th
September 2022.
First up is Liam Price who was capped for the Irish U17 men’s team. Liam
started his basketball career with Limerick Lions at U10 and has worked hard at
his game throughout the years. Liam currently plays with Limerick Lions U18
and U20 men’s teams and is hoping to continue to learn, develop and improve
his basketball game.
Next up is Danny Shahab, also capped for the Irish U17 men’s team. Danny
started his basketball career playing with Limerick Lakers where he learned to
love the game. He moved to Limerick Lions at U16 level so that he could
compete in the A division in the Cork league and cup. Danny has been a
wonderful asset to the Lion’s teams and he is hoping to have a very successful
season this year.
Darragh Horkan was capped for the Irish U16 men’s team and competed in this
year’s Euro Championship. This was a fantastic achievement for Darragh as he
was still U15, so we are looking forward to another wonderful performance
from Darragh at the U16 Euros in 2023! To compete in the Euro’s when you are
a year young is an accolade handed to very few. The future is bright for this
young Lion.
Last but by no means least, Fionn O’Meara received his cap for the Irish U16
men’s team this year. Fionn played with Nenagh Warriors last season and
developed his game under the watchful eye of Patsy & Niall Farrell. During this
summer, Fionn made the move to Limerick Lions to compete in the U18 Cork
league & cup, U18 National Cup and U20 National league. I’m sure all at
Limerick Lions and Nenagh Warriors will be keeping a close eye on Fionn’s
progress over the coming years.
Congratulations to all four lads and the best of luck in the upcoming season!

Elite vision from the Joker 🔥

Saint Louis' offensive woes caught up with them in a big way tonight. Shot 31 pct in an 84-62 loss at Iona. Javonte Perkins continues to struggle coming off his injury, and they're getting no scoring from Francis Okoro. Travis Ford has some work to do.

HAVE A NIGHT CAP @Jeremyroach10